At the end of my second deep sea voyages on Mahseer as a Junior Radio Officer (R/O) I was instructed by the Radio Department to coast her around to Liverpool (in sole charge of her Wireless station) and then to attend an interview with the Chief Radio Superintendent in his Liver Building Office. The reason why I had been so instructed is as they say another story. At the end of the meeting the outcome was one I had never anticipated because I was told (to my delight) that on completion of my leave I would be promoted to the rank of Senior Radio Officer. This meant that I could operate and be in charge of any of Brocklebank’s ships wireless stations.

With Thos and Jno Brocklebank seniority was denoted by your position on the salary scale and on the age of the ship that you were responsible for. As I was newly promoted I was assigned to one of the then oldest ships in the fleet which was the Steam Ship (SS) Magdapur.

The Magdapur was built by William Hamilton and Co Ltd of Port Glasgow in 1945. Her displacement was 9142 tons and she was 504 feet long. She was eventually broken up in Pakistan in 1970 at the age of 25. She was the second ship to carry that name, the first falling victim to a mine in 1939 when she was sunk off the Suffolk coast.

Magdapur only carried one radio officer so it was an absolute pleasure for me to be solely responsible for the ship’s wireless station. Her equipment was amongst the oldest that I ever worked with and included a piece of direction finding equipment made by the Canadian Marconi Company that must have seen service during the Second World War. I did five voyages on her in total, four Home Trade (coasting) and one Deep Sea. I also stood by on board when she went into the Smith’s dry-dock in North Shields for some major upgrades including equipment replacements in the Radio Room but again that is another story.

I must explain here that this tale is not an advertisement for fast food of a particular type because at the time the events reported in this story took place the fast food chain Wimpey’s were dominant on the UK’s high streets and I don’t think that McDonald’s as a company were even trading in the UK. Instead this tale is about my one deep sea voyage on the Magdapur when she carried passengers.

All of the Brocklebank ships that I sailed on had an Owner’s Suite. I was told that there were tax benefits to the company in having these as part of the accommodation. The Owner’s Suite on all the ships always struck me as being very well appointed having a day room as well as a separate bedroom with en-suit toilet and shower. The quality of the furnishings was of the highest order. Under most circumstances this accommodation was never used, being accessible only to the Chief Steward and his staff. The first time it was occupied when I was at sea was on the Magdapur on a voyage from the UK to India.

The passengers who travelled on that voyage were a woman who was possibly in her early forties and her daughter who I think was in her early teens. They were returning to India at the end of the girl’s school term and were travelling back by sea as part of the Christmas holiday. I seem to remember being told that the woman’s husband ran an Indian tea plantation and it’s possible that Brocklebank ships carried his tea back to the UK as cargo.

As you can imagine they were immensely popular additions to the ship’s company particularly as the mother was a great one for socialising. Henceforth I will refer to her as “Mum”.

On the Magdapur as on most ships that I sailed on the engineers were the most sociable group amongst the ships officers and it wasn’t long before Mum and daughter were spending a great deal of time in their company.

Mum was a good-looking woman of medium height with fair, shoulder length hair but her lifestyle as a tea planter’s wife coupled with lack of exercise had added a few pounds to her figure. She was an extremely tactile person with a very warm friendly nature.

Our outward voyage to Calcutta included a visit to Gan Island in the Seychelles. Gan at that time was an RAF staging post between the UK and the Far East for all types of aircraft including Vulcan Bombers and was a regular port of call for Brocklebank ships on their outward bound voyages to Ceylon (Sri Lanka) or India. 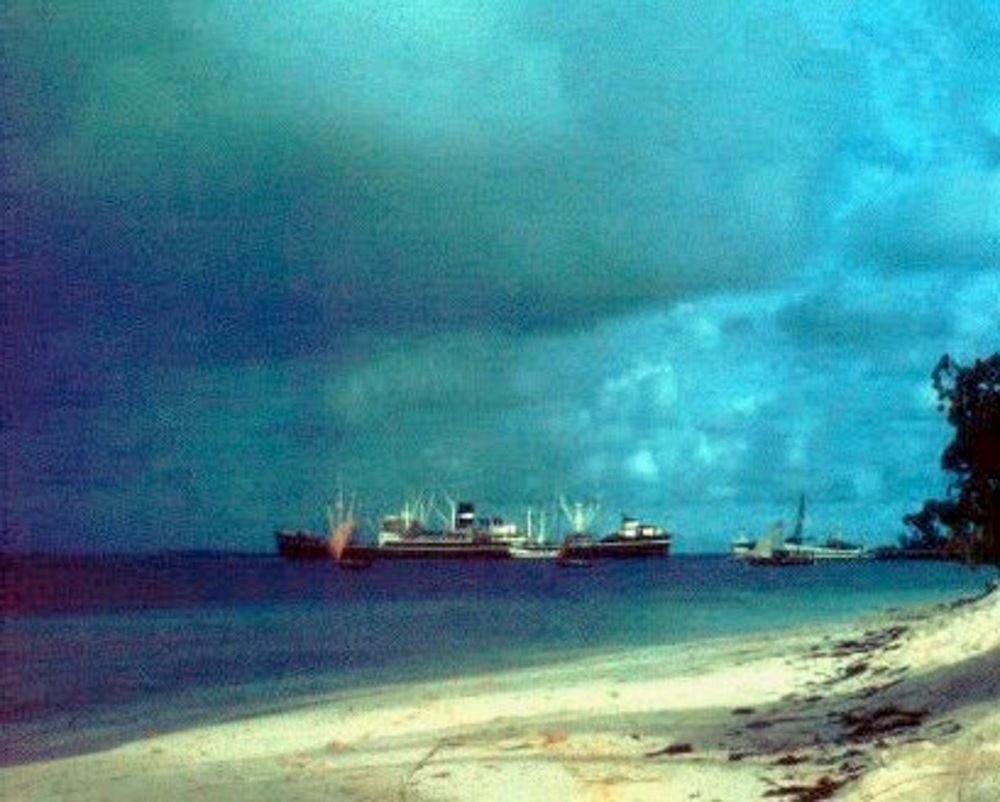 A Brocklebank ship (SS Mahseer) anchored in the Lagoon at Gan Island in the Seychelles. Although heavily processed, the picture shows how beautiful Gan Island was.

As Gan is located south of the Equator and because neither passenger had previously paid their respects to Father Neptune an appropriate ceremony was laid on to allow them to do so. This was a hilarious affair and great fun was had by all. The ship’s company were in great spirits therefore when the ship later dropped anchor in Gan’s beautiful coral fringed lagoon.

Now the RAF were always great hosts and it was common for the ships officers to receive invitations to visit the Officer’s and Sergeant’s mess. The sergeants mess was the most popular with Magdapur’s officers because of the total lack of formality and because the drinks were cheaper. Now an important point to raise here is that the service men on Gan were on twelve month tours of duty that were unaccompanied. The only female on the entire Island was an RAF nursing sister attached to the military hospital. You can imagine therefore that a female visitor would cause great excitement and interest.

On the night in question I had not gone ashore so apart from the last part of the story I did not witness events at first hand.

Apparently Mum had gone to the sergeant’s mess accompanied by a couple of Magdapur’s engineers. Daughter had been left on board in the company of a good book from the ship’s library.

From all accounts the visit ashore had been a resounding success with Mum receiving an enormous amount of attention particularly from an RAF Sergeant whose name I do not now remember but whose nickname was “Big Mac”.

Big Mac was a very large man who stood well over six feet in his stocking feet. He had a physique to match and would be the ideal sort of person to have with you if you were faced by an unfriendly mob of visiting football supporters after they had lost five nil.

It appears that good company fuelled by large amounts of alcohol together with Mum’s friendly nature had left Big Mac with the distinct but erroneous impression that the evening would end up for him with more than a goodnight peck on the cheek.

However it was not to be because when matters seemed to be getting a little out of hand Mum called on Magdapur’s engineers who had gone ashore with her, to escort her back to the ship. Apparently there was some sort of heated altercation between Mum and Big Mac as she waited at Gan’s jetty for the launch to take her back to the ship.

Mum arrived back on board with her reputation intact even if a little the worse for wear. She then went to the Owner’s Suite for a well earnt rest. Big Mac meanwhile returned to the Sergeants mess to drown his sorrows and no doubt to reflect on how and where he went wrong.

I guess most men in his position would lick their wounds, put their disappointment down to experience and park the nights encounter at the back of their minds as more solid evidence of the mysterious ways of women. Not Big Mac.

After fuelling his ardour some more in the Sergeant’s Mess, he apparently commandeered an RAF launch and headed towards the Magdapur who as I said lay quietly at anchor in the islands lagoon.

When Brocklebank ships were berthed or at anchor it was usual practice for one of the ships quartermasters to keep watch on the gangway. Usually things were quiet at Gan and on this particular night the gangway was temporarily unattended when Big Mac came onboard.

On the Magdapur, the navigating officers cabins were located on the boat deck under the Bridge, with the accommodation for all the other ships officers, including the Owner’s Suite one deck below on the accommodation deck. My cabin, on the port side was located just forward of the Owner’s Suite where Mum and daughter were by now sleeping peacefully.

I was woken from a particularly deep sleep by someone shouting. This was accompanied by a woman’s screams. I dragged myself out of bed stopping only long enough to pull on a pair of shorts.

On leaving my cabin to look towards the source of noise I saw what could only be described as a scrum in the narrow corridor. Engineers, quartermasters and Big Mac were all locked together in a heaving mass. Eventually Big Mac was subdued by sheer weight of numbers and the noise diminished from a football crowd roar to a point where Big Mac could be heard to say that he would behave himself if he were allowed to get up.

He did go quietly after that and was escorted ashore by one of the ships quartermasters in the same launch that he had arrived in. In the morning when more sober council applied it was agreed that no formal complaint would be made to the RAF authorities. Mum certainly did not wish to make a fuss and as far as I am aware no action was taken by Gan’s commanding officer over the unauthorised use of the launch.

Magdapur finished discharging her cargo and strange to say Mum stayed on board and declined any further invitations to go ashore. From memory, she seemed completely unfazed by the incident. Whether her appetite for Big Mac’s was diminished by the experience or not I cannot say.

Magdapur then continued on her “passage to India” (good title for a book!) and her discharge port of Calcutta. Thankfully after all the excitement on Gan, normality quickly returned to shipboard life as Magdapur’s officers and crew resumed their sea going duties.