I can claim without fear of contradiction, that going to sea when I was a young man in my early twenties, provided me with so many fantastic experiences that I now find it very difficult to believe how narrow my experience of life had been beforehand. One of the most life enhancing changes occurred in respect of the type and range of foods that I sampled at sea. My mother was an excellent cook but I cannot remember ever being served dishes at home that contained Indian spices or garlic.

Anyway I digress because working for Thos and Jno Brocklebank opened up a whole new culinary World to me. Three times a day I was presented with a choice of very well prepared European and Asian dishes and the dilemma was always what should I eat? Who can forget the Bombay duck, Kedgeree, hot cakes and syrup, devilled kidneys and best of all the curries that were always available at lunch times?

Since my introduction to Indian food on Mahseer I have been partial to curry although to this day I continue to have a powerful reaction to chilly that causes me to perspire heavily immediately after the first forkful enters my mouth. I guess it is a small price to pay compared with the delight and pleasure of eating a dry mince, Madras Lamb, Chicken Korma or Egg curry! Most Indian (Bangladeshi) restaurants in the UK do not come even close to the authentic dishes that were served on board the Brocklebank ships that I sailed on. The mother of a friend who is a Kenyan Asian used to regularly make me curry and her Bombay potato dishes were to die for. 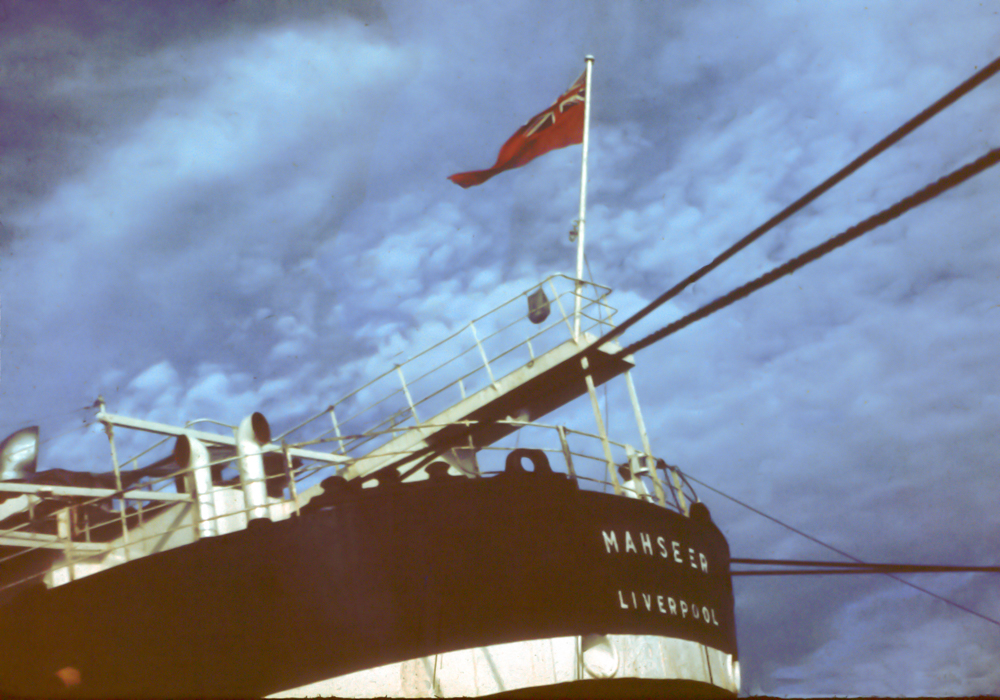 A stern view of the SS Mahseer taken in Colombo Harbour in 1964.

I never ever sailed on a Brocklebank ship that was a poor feeder and never sailed with a Chief Steward/ Purser who sought to restrict what was provided for the benefit of their own pocket. I did see boxes of stores and alcohol go over the side of the ship but never to my knowledge did I suffer as a consequence.

I sailed with many excellent Chief Stewards and judge that Alan Wood was up there amongst the best.

When I met him for the first time, I would judge that “Big Al” as he was affectionately known was in his mid to late forties, although I might be wrong on this. He was on the short side and going bald. What was immediately noticeable when you saw him was his extensive midriff that put a lot of strain on the waist band of his uniform trousers and shorts.

Big Al was ably assisted by the second steward Ron whose surname I cannot now remember. Ron was tall where Al was short, was slim where Al was rotund and had a full head of hair whereas Al was losing his rapidly.

It might be hard for some modern seafarers with their IPods, satellite television, DVD players and access to the Internet to appreciate how little there was in the way of shipboard entertainment on cargo ships in the 1960’s. Mahseer had a ships library, a dart board and table tennis table in the rear saloon and an Eddystone general purpose receiver in the bar. During my time on board one of the engineers had a record player which he left in the bar but that basically was it. This was a time even before film projectors were provided. To suggest it was bleak would be wrong because Mahseer was a friendly ship and most of the social life in the evenings and weekends revolved around card games, dominos, Mah-jong, the BBC World service and above all conversation and good humour.

Saturday evenings were always lively affairs particularly when the football results were announced by the BBC. The Chief Engineer and many of the other officers on board were passionate Liverpool supporters and the mood varied between euphoria (when they won) to bleak despair (when they lost) which I have to say wasn’t very often as this was during the managerial reign of the legendary Bill Shankley.

As the voyage progressed, rumours and whispers began to circulate that Big Al was planning something special. Hard facts were difficult to obtain. It was suspected that full details were known only to a very small band of trusted confidants. Juniors like me tried hard to find out what was planned but the way in which the secret was guarded would have made any Eastern European State Security Service of the time, very proud.

In an unguarded moment Ron the Second Steward let slip that the ingredients had been obtained from the ships chandlers at our Continental ports of call, that the dish was such a speciality that it could not be entrusted to the ships cook but would be prepared by Big Al himself and that anyone allowed to taste it should consider themselves to be one of life’s chosen ones. You can imagine the suppressed excitement therefore when it was further revealed that the meal in question was to be a Chowder. You patient reader, might at this point be forgiven for saying to yourself good lord is that what the fuss was all about? But at that time, I had never heard of Chowder let alone tasted it and did not wish to announce to the whole ship what an ignoramus I was. So I kept quiet and waited.

One Saturday afternoon when we were crossing the Indian Ocean, Big Al was, most unusually for him, to be seen working on his own in the Galley. Questions as to what he was doing were rebuffed with unusual terseness. Ron also was extremely reticent to enter into any sort of conversation claiming that he was extremely busy and could not spare the time for a chat.

Attendance at dinner in the saloon that evening was poor. Senior ranks were noticeable by their absence leading to speculation amongst us juniors that tonight must be “it”. If the other juniors were invited to participate, they did not let on to me. All I knew was that if invitations had been sent out, mine had been lost in the post.

On the Mahseer the galley, R/O’s and Chief Steward’s cabins, the serving pantry and the dining saloon were all on the Starboard side. To return to my cabin from the Radio Room (on the boat deck) it was necessary to come down the internal staircase, turn left to walk in front of the dining saloon doors and then turn right past the serving pantry and down the corridor.

At about nine in the evening, having completed my watch and closed down the ships wireless station, I started to return to my cabin. What a surprise it was therefore to find that the door of the serving pantry was open with a number of senior officers standing in the corridor outside the pantry holding soup bowls in one hand and large pieces of fresh crusty bread in the other. Holding court in the pantry was Big Al, ladle in hand dispensing largesse from a large, deep stockpot.

The smell was astonishing. I would defy anyone, even if they had just enjoyed a large meal not to feel hungry when enveloped by that heavenly bouquet of fish, herbs and freshly baked bread.

As I stopped and then lingered in front of the serving pantry door, I felt I was re-enacting the scene from the film Oliver Twist, when Oliver stood in front of the Beagle, held out his dish and asked for more. I wasn’t an orphan, had already eaten a large meal earlier in the evening so wasn’t desperately hungry and certainly wasn’t small for my age but I must have had a pleading expression on my face as big Al asked me if I would like to taste his Chowder. My affirmative answer resulted in him plunging the ladle deep into the liquid, accompanied by a scraping sound as he recovered that ambrosia from the depths of the pot.

As I looked down into my steaming bowl and tasted its contents it became abundantly clear that Al’s Chowder was a fish stew. However that simple description fails to do it justice because over the next five minutes, my taste buds lit up in a frenzy of excitement as I embarked on a journey of discovery and pleasure.

There were pieces of pink fish, white fish, molluscs of various types and prawns of different sizes, all firm but beautifully tender. The liquor was opaque but infused with the subtle taste of herbs. There was also a slight sensation of heat as obtained from spices but nothing excessive. It was a masterpiece in its way deserving of a place in an art gallery had it been a painting or a piece of sculpture. It deserved a Michelin star long before the days of celebrity chefs and foodie gurus. Al stood there beaming, proud of his achievement and basking in the well deserved compliments. Having finished the first bowl I asked for a refill but was told in no uncertain terms to clear off and count my blessings. I walked away feeling at peace with the World savouring the after-taste.

That was the only time during my two deep-sea voyages on Mahseer that Big Al made Chowder. He always refused to reveal its ingredients and the method of preparation and I never sailed with him again on any other Brocklebank ship after the Mahseer. Perhaps there are others who sailed with him who were fortunate enough to experience what I did in 1964 and remember it as I do to this day.

Many, many years later, long after I had left the sea, I had the opportunity whilst on a business trip to the USA, to find myself in a very popular Boston fish restaurant that was located in a converted warehouse on the Boston waterfront. Featured prominently on the menu as a house speciality was its World famous (their claim), Boston Clam Chowder. Eager for some nostalgia and a repeat of my experience with big Al’s chowder I gave into temptation and ordered it as my main course.

To say that I was disappointed would be an understatement because the fishy tasting gruel served in Boston was a mere shadow of what I had experienced on Mahseer. Since then whenever there has been Chowder on a restaurant menu I have avoided it in tribute to my memory of Big Al’s masterpiece.