At the commencement of some television programmes there is often an announcement to the effect that the programme that follows may contain flashing images, scenes of violence or adult themes. This tale contains non of those things but reading it may cause severe drowsiness or the eyes to glaze over for any reader who is not interested in radio communications. If you fall into this category, then I respectfully suggest that you find something more interesting to read than this story!

The Radio Officer's Bible in the 1960's was the Handbook for Radio Operators, published by the General Post Office. In Appendix 2 of this document is a list of the Q codes used by a range of different Services but most particularly from a Radio Officers (R/O) point of view were those that related to Maritime communications. These Q codes provided abbreviations to a whole series of questions and answers to queries that might be raised between ships, Coast Stations and Aeronautical services. They greatly simplified large areas of communications and reduced communication exchange time to a bare minimum. 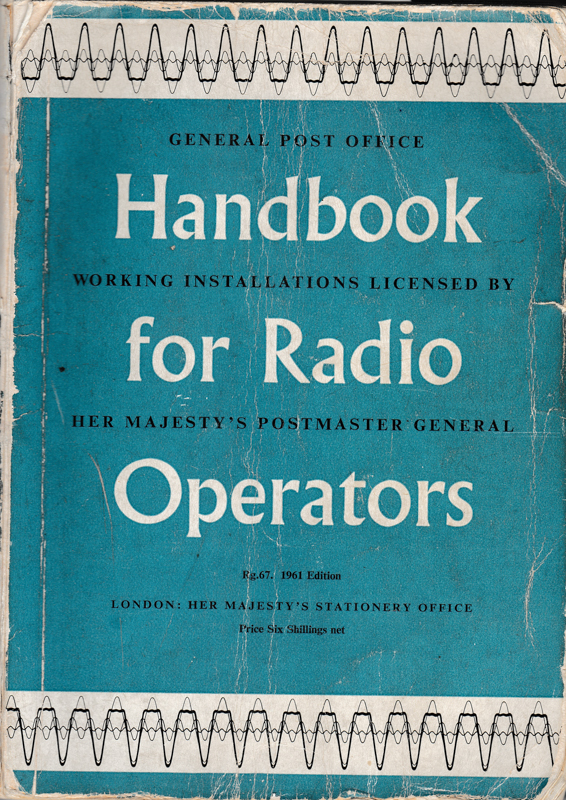 My rather tired looking and dog-eared copy of the Handbook for Radio Operators referred to in this Tale.

The same Q code provided a mechanism for both a query and the answer to that query. What distinguished the question from the answer was a transmitted question mark after the Q code. Two simple examples may help to illustrate their usefulness. QRA? meant "What is the name of your station". QRA in response might be "The name of my station is the SS Manaar/GFRG" sent from the ship as QRA Manaar/GFRG.

A regularly used Q code between a ship and a Coast Station was QTC? This meant "How many telegrams have you to send". QTC 3 in response, meant that the reply was "I have 3 telegrams for you".

In all there were about 90 Q codes that a would be R/O would have to learn by heart, many not being used again once the R/O had qualified and was working at sea.

The 1960's meaning and use of QRP was aimed at reducing interference from ships stations to other ships or Coast Stations when they were transmitting messages in Harbours and estuaries, but its use in this story reflects the modern usage particularly amongst radio Amateurs to indicate use of extremely low transmitter powers when attempting to communicate over long distances using the short wave bands. Remember I did warn you that this story would perhaps cause your eyes to glaze over or make you sleepy!

All of the Thos and Jno Brocklebank Ltd ships that I sailed on had transmitters that in relative terms were low powered. In some cases these units although physically impressive standing well over six feet tall and built to withstand the very worst that the marine environment could throw at them could generate radio frequency energy that was equivalent to or less than the energy consumed by a 100 Watt incandescent light bulb. These very large and physically imposing transmitters in most cases were designed to work on both the medium wave band and the short wave bands.

As far as I am aware these modestly powered transmitters fitted to most British ships were not mandated by the International Radio Regulations of the time but were I believe driven by cost issues that were so important to British Ship owners. Also because the UK and Commonwealth Area Scheme was still in existence and offering alternative routing paths for telegrams to and from British and Commonwealth merchant ships, modestly powered transmitters were in most cases more than adequate for the job. However it was not unusual for the transmitters of American and Greek Flagged Merchant ships of the time to be rated at over one-kilowatt because they had no alternative but to communicate point to point across the World to their countries of origin.

One of the most fascinating aspects of communicating on the short wave bands was its unpredictability, influenced as it was (and still is) by time of day, choice of frequency, signal fading and by the date position within the eleven year Sun Spot cycle.

On Brocklebank's SS Magdapur the medium wave and short wave transmitters were separate units. The shortwave transmitter was an antique piece of equipment but one that proved to be extremely reliable during the time I was on the ship. I believe it was manufactured by the Standard Telephone and Cables Company (STC) but would not swear to this. What I do remember was that it was relatively small and compact and sat in the Radio Room on the table to the left of the operator’s chair. It was rectangular in shape and had perforated metal screens fitted to its sides that enabled you to see its internals. The controls were relatively simple and easily accessible. I also remember that it had a single 813 Tetrode thermionic valve as its final power amplifier and that you were able to see this valve through the ventilation holes drilled into its side panels.

On the day in question, Magdapur was her way home from Calcutta, about half way across the Indian Ocean heading for the Gulf of Aden.

In the late evening the captain handed me a telegram to be sent to Brocklebank's Head Office in Liverpool. To me it remains one of life's mysteries why telegrams that could have been written much earlier in the day always seemed to materialise towards the end of the last watch. To some Captains procrastination was an art form to be practiced whenever and wherever possible.

Brocklebank company’s instructions to it's R/O’s gave us three options for telegram routing using the short wave bands. The primary route was directly to the United Kingdom via the Area 1A station located at Portishead in Somerset. The second was via the Area station whose geographical area the ship was sailing through at the time and the third was to relay the telegram via another Brocklebank ship that could be contacted during one of the frequent GWZM (Brocklebank collective call sign) schedules distributed through each watch keeping period and throughout the four watch keeping periods of each day.

Keeping any feelings of injustice under control having been on and off watch for almost sixteen hours and being philosophical about the matter, I accepted the message with good grace and converted it into a telegram by completing a word count and adding a standard preamble. This then allowed me to get down to the serious business of clearing the message as quickly as possible.

In the 1960's there were non of the radio propagation prediction tables or charts that are so readily available to today's radio amateurs. Knowledge of which short wave band to use came with experience based on the Ionospheric propagation theory learnt at Wireless College. A guiding principal then (and now) is that if you could hear the station you wanted to work, there was a reasonable chance that they could hear you when you called them.

Tuning the STC short wave transmitter was straightforward and after moving the control switches to their predetermined positions (for the chosen band and calling frequency) all I had to do was tweak the loading and coupling controls for maximum power transfer into the ship's aerial.

After operating a ship’s transmitter over a period of some months, you were able to judge by the sound it made when it was keyed, whether it was working correctly or not. On the Magdapur’s HF transmitter a further confidence check was provided by the blue ionisation that surrounded the anode at the top of the 813 final amplifier valve when it was optimally loaded. It was possible to see this glow from the operating position.

I remember calling Portishead unsuccessfully over a period of about twenty minutes, changing bands throughout the time to see whether propagational conditions were more favourable on alternative frequencies. On many of these bands Portishead's transmissions were received by me loud and clear as the station worked other ships. However no matter what frequency band I tried or how many times I called I could not make contact with Portishead. I therefore decided to route my telegram via the Area 3 station on the Island of Mauritius.

The telegram was unusually long and because there was a fair amount of static I believe that I reduced my sending speed to improve the prospect of a successful delivery.

Halfway through sending the message, the sound of the transmitter changed and on looking up at the transmitter's front panel I could see that there were no power indications on its meters and no familiar glow from its power amplifier valve. I had the option of breaking off communications to investigate the fault or continue sending the message although there would be very little prospect of it being received.

Without stopping or interrupting my transmission I continued to send the message. Imagine my surprise therefore when the operator at the other end acknowledged it without any request for repeats. It was amazing. I had sent the second half of the message with what I believed was a dead transmitter.

In signing off with Mauritius I explained what had happened and the operator wished me well with my faultfinding. I sat back absolutely stunned. If I had been a betting man I would have wagered anyone that completing the message after the transmitter died would have been impossible. I reverted to listening watch and informed the captain that the message had been sent.

By this time, I had gone well beyond the end of the watch so after activating the automatic alarm I started to fault find the failed transmitter. What I quickly discovered was that the 813 power amplifier valve had gone soft. This term means that air had entered the valve's glass envelope destroying the vacuum that was essential to its operation. The glass must have weakened over time and probably the heat generated through my unsuccessful attempts to contact Portishead had lead to its demise. Fitting a replacement valve restored the transmitter to full working order.

When I thought about the situation afterwards I concluded that what had worked in my favour was that I had already started to send the telegram and that the operator at Mauritius was highly skilled and able to read my signals albeit at a much reduced level.

Secondly although the 813 valve had failed there must have been sufficient coupling through it from the drive stages of the transmitter to permit a very low level of radiation. Possibly a few thousands of a watt but that was sufficient. In all my time at sea, that was the only occasion when a transmitter failed on me during the transmission of a telegram. For the remainder of my time on Magdapur the STC transmitter continued to be an extremely reliable unit.

I now have a very low powered transceiver in my ham shack that in size is little bigger than a box of 50 tea bags. I use it because its software defined receiver out performs anything that I used during my time at sea. Its maximum transmitter output power is 5 Watts. Today many radio amateurs specialise in even lower powered communications and after my experience on the Magdapur I have to salute them for their skill.

My experience of QRP working on Magdapur in the Indian Ocean was a one off brought about by circumstances and not by design. On all other occasions after the incident described, when I was required to use a ship's medium wave or short wave transmitters I always radiated the maximum power that the unit would allow.