When I worked as a Radio Officer (R/O) for the Thos and Jno Brocklebank shipping company, it was part of the Cunard Group who at that time also operated cargo ships in addition to their World famous passenger liners (Queen Elizabeth and Queen Mary).

In the summer of 1966 Brocklebank’s SS Manaar was sailing on her homeward bound voyage from Colombo when we were given a very rare opportunity to visit Cyprus. Having crossed the Indian Ocean and travelled up the Red Sea, we were in transit through the Suez Canal when the Captain received a telegram from Head Office in Liverpool telling him to divert to Farmagusta in Cyprus to collect a cargo of grapes.

At the time of our visit it was unknown for a Brocklebank ship to call at Cyprus to collect or deliver cargo. That trade within the Cunard Group usually went to Cunard cargo ships. I think the reason for Manaar being involved was that the Cunard ship that had been designated for this cargo had been delayed for some reason and because Manaar was ideally positioned in Egypt, heading home and with sufficient space in her refrigerated holds for the grapes, we were given the cargo. So after we exited the Suez Canal instead of sailing to Tilbury, we headed north to Cyprus.

The instruction to divert generated quite a number of messages between the ship, the Head Office in Liverpool and the shipping agents in Cyprus, because Manaar’s Captain had never carried grapes before so wanted to know what the ideal storage conditions for that type of perishable cargo would be.

We knew that the Greek people had a well deserved reputation for friendliness. However what we received in the way of hospitality during our stay in Farmagusta exceeded our expectations in every way. 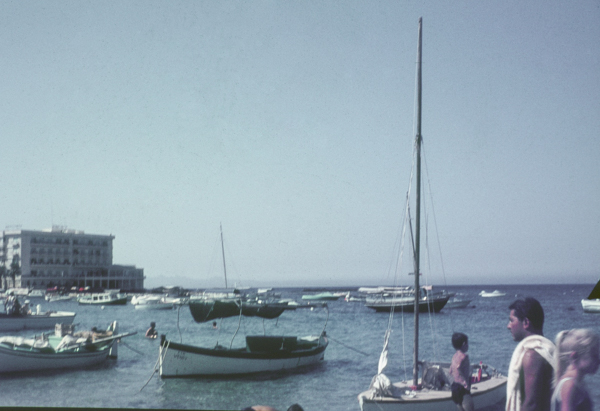 We were loading at Farmagusta for the best part of a week which gave Manaar’s officers lots of opportunities to go ashore to see the sights of the old town and to spend time on the port’s gloriously sandy beaches. This visit took place before Cyprus was partitioned. It is so sad now that the northern part of the island, including Famagusta is shut off from the rest of Cyprus because it seems to me looking back, to have been one of the most attractive beach side towns that I had ever visited.

To say that we were saddened when the ship finished loading would be an understatement because all of Manaar’s officers felt we were leaving old friends. Before we left, we were presented with many boxes of grapes to act as a special reminder of our stay. The grapes themselves were deliciously juicy but somewhat acidic. I imagine they had been picked just ahead of being fully ripe so as to allow them to mature to perfection during the sea passage to the UK.

We left Famagusta and headed west, looking forward to an uneventful final leg of our voyage home. Ahead of us was the prospect of almost a week of fine weather, blue skies and calm seas before we arrived at Tilbury when the ship would pay off. However that was not to be because as often happens at sea, fate took a hand in our affairs in a way that was entirely unexpected. For me it meant lots of extra work sending and receiving messages related to a suspected medical emergency.

All Brocklebank ships carried a medical room. On Manaar it was located on the Port (left hand) side on the accommodation deck immediately next to the owner’s suite. Its management and use was strictly controlled by the Chief Steward and his staff. I have absolutely no idea as to how well equipped these rooms were and whether the Chief Steward had anything other than the most basic First Aid training.

Up until this time in my seagoing career these medical rooms were never used for anything more serious than the bandaging of cuts, the treatment of minor burns or to dispense a vile tasting liquid called Kaolin and Morph that was dispensed to those unfortunate enough to be suffering from the debilitating effects of Diarrhoea. The centre piece of the room was a swivel examination table that was bolted securely to the deck. It was on this table that major medical treatment or surgery was carried out. What the ship carried in the way of surgical instruments or medical reference books I cannot say.

As we travelled westwards towards Gibraltar, it was discovered that one of the ships navigating apprentices who was in his early teens and on his first trip to sea was unwell with suspected Appendicitis. Who made the diagnosis and under what circumstances I cannot say. What I do know was that there was sufficient concern about his condition for the Captain to generate a number of medical enquiry telegrams that were sent to the Gibraltar port medical authorities seeking information about how the diagnosis of Appendicitis could be confirmed, what treatment was appropriate and what could the ship do if his condition worsened.

It is worth mentioning here that Manaar was not equipped with any long range radio telephony (voice) equipment. For voice communications she only carried the extremely range limited VHF equipment. All medical emergency messages to and from the ship therefore were sent using wireless telegraphy (Morse code signals) handled by me or my junior. Incidentally medical messages were handled free of charge by all agencies including the ship and the receiving Coast Station.

I have no doubt that the Captain and Chief Steward were not looking forward to the prospect of having to perform an operation at sea and were no doubt reassured by the fact that the Apprentice’s condition appeared to be stable. How he looked and felt at this time I cannot say because I did not see him again after we left Famagusta. I suspect that even seasoned sailors in the Merchant Navy, let alone a teenager on his first trip to sea would tremble at the prospect of being operated on by a medically untrained Captain and Chief Steward. It would take more than a large dose of Kaolin and Morph to control loose bowel motions under those circumstances!

Cyprus is also known as Aphrodite’s Island and I believe it is possible that some of those ancient Greek Gods smiled on Manaar and its patient because his condition did not worsen. No doubt the Chief Engineer burnt extra fuel to keep Manaar’s turbines working hard because we made Gibraltar in record time, certainly well before the operating table in her medical room needed to be swabbed down and the scalpels (assuming there were any on board) sterilised.

Manaar arrived at Gibraltar in the early hours of the morning and was not required to go alongside. A doctor came out to Manaar on a Port Authority Launch to examine the patient and afterwards he, the patient and all the patient’s belongings were transported ashore in the same launch. On landing in Gibraltar, the Apprentice was transferred by ambulance to the local Hospital.

Immediately after the Apprentice had disembarked, Manaar left Gibraltar and headed for Tilbury. We did hear before we paid off that that our patient did not have a perforated Appendix and therefore did not require surgery. We were told that his condition had most likely been caused by severe indigestion and stomach cramps brought on by eating too many highly acidic and therefore sour grapes!

Back in the 1960's being taken ill at sea was always an issue at the back of your mind although as far as I am aware it was never a general topic of conversation on board ship. How a Captain would seek assistance if it was the sole R/O on board who was taken ill I’ll never know. In the case of Manaar’s Apprentice it was comforting to know back then that help and medical assistance was on hand at the end of a telegram. Had his condition worsened then I suspect we could have diverted to a port nearer than Gibraltar or generated calls on the International Distress Frequency of 500 kHz for assistance from a ship with a Doctor on board. Fortunately when our medical emergency occurred we were in the Mediterranean on a major shipping route and not in the middle of the Indian or Pacific Oceans.

That voyage in 1966 on Manaar left me with a legacy of wonderful memories that remain with me to this day because I met so many great people both on board and ashore. Whether it was sour grapes or not that caused our Apprentice’s health problems I will never know. Suffice to say that this tale had a happy ending because as far as he was concerned he avoided on-board surgery, received first rate treatment in Gibraltar and no doubt continued his sea going career after his recuperation and repatriation to the UK.